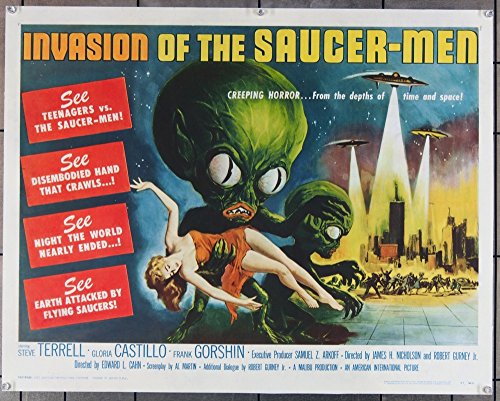 Invasion Of The Saucer-Men (1957) Original Half-Sheet Movie Poster 22 x 28 Science Fiction Masterpiece Poster American International Original Half Sheet Poster (22x28) for the comic science fiction classic INVASION OF THE SAUCER-MEN (1957). A film that is described by one wag as "a film that can never…

American International Original Half Sheet Poster (22×28) for the comic science fiction classic INVASION OF THE SAUCER-MEN (1957). A film that is described by one wag as “a film that can never go out of style because it is so bad that it never was in style.” And this film, directed by Edward L. Cahn, has yielded one of the very best science-fiction movie posters of the era. There are several good posters on the title. Here is the half sheet with the globe-headed, green-veined alien carrying a damsel in distress, the classic art by Albert Kallis. The film was based on a short story “The Cosmic Frame” by Paul W. Fairman. Originally intended as a serious sci-fi movie, it devolved into a comedy or sorts. The movie stars Steven Terrell, Gloria Castillo, Frank Gorshin, Raymond Hatton and Lyn Osborn. This example of the poster was used in a theater. It was then folded, but was paperbacked some years ago. When we examined the poster, we thought that the restoration could be refined and improved. We had the poster completely rebacked and restored. The result is very nice indeed. We have graded this poster as very good plus restored to fine. Colors are bright. MovieArt Austin guarantees that this poster is an authentic U.S. half sheet for this film. MovieArt Austin will sell no reproductions 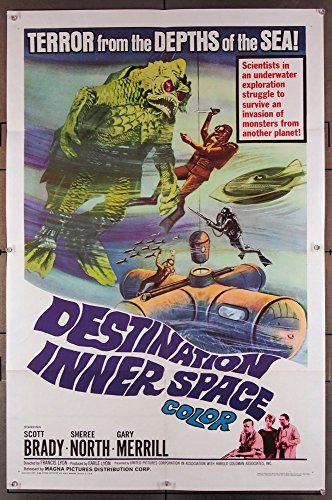